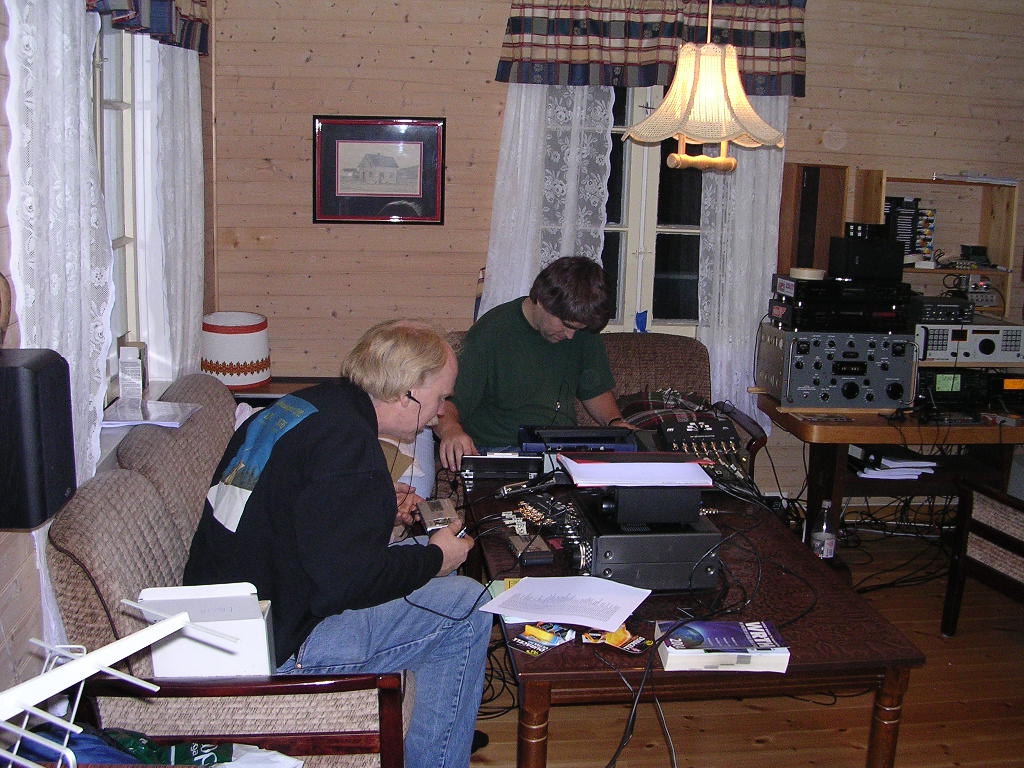 31-AUG-2004
Ole reports that he is quite optimistic for the season. He is packing a NRD-525 and AOR AR7030 with accompanying MD-players when he goes to Kongsfjord. The goal is to catch Hawaii ...

1-SEP-2004
Tore Johnny reports that his new Icom R-75 is on its way and that this will be his companion to Kongsfjord.
He does share Ole's goal to catch Hawaii.

7-OCT-2004
With one week to go Bjarne has prepared all the antennas and is now testing to see if things are working properly. They seem to be ... Yesterday afternoon as good as all Hawaiian AM stations were logged and today Guam at 567 and 801 were logged with excellent signals. We are looking forward to this ...

15-OCT-2004
Ole and Tore Johnny arrived late on the 14 October and started rigging equipment at once. The geomagnetic conditions are far from favorable, but the signal path seems to be open - KBRW-680 was heard all day the 14th with a very strong signal.

Update 05:15 UTC
Few nice loggings during the first night:
KRDO Colorado Springs CO 1240, KAIR Atchison KS 1470, WMQM Lakeland TN 1600
Bjarne is a bit concerned how this is going to turn out when conditions get better ...

Update 10:30 UTC
Nothing big, but the first Hawaii stations are logged, KGU Honolulu 760 and KHVH Honolulu 830.

Update 12:00 UTC
Many stations from Hawaii now with strong signals.

Update 05:00 UTC
Rather boring during the beginning of the night, best logging KFNY Enid OK 1640.
La Plata conditions in the morning.

Update 08:30 UTC
Good conditions towards a wide range of North America - from Boston to Sacramento.

Update 12:30 UTC
Excellent towards the west coast, lots of stations on the graveyard frequencies during the day.
Mentioning KQEN Roseburg OR 1240, KBBR North Bend OR 1340, KQMS Redding CA 1400.
Only Alaska and Hawaii now + Guam 801.

Update 10:30 UTC
During the morning the conditions seemed to quiet down for a while, but then it came back.
Sample catches are KFKA Greeley CO 1310 and KNOX Grand Forks ND 1310.

Update 14:00 UTC
With little time for details Bjarne sends a message that "this has been a fabulous 24 hours - the best ever in KONG history".

Update 09:18 UTC
As Tonga reached excellent quality some unknown noise set in and put an end to Pacific DX. The noise seems similar to the one experienced during KONG7. Hopefully it will go away or we will find a way to eliminate it.

Update 14:00 UTC
Nothing particular during the day. Also need for some rest!

Update 17:30 UTC
The geomagnetic disturbance from the passing coronal hole is clearly noticeable.
Hopefully the conditions will recover shortly.

Update 05:00 UTC
Lots of aurora last night, but lots of NA and LA despite this, however not much exciting.
The aurora activity has now quieted down so it will be interesting to see what the morning brings.
Tore Johnny and Ole will be leaving Kongsfjord around 09:00 UTC so there is not much time left.